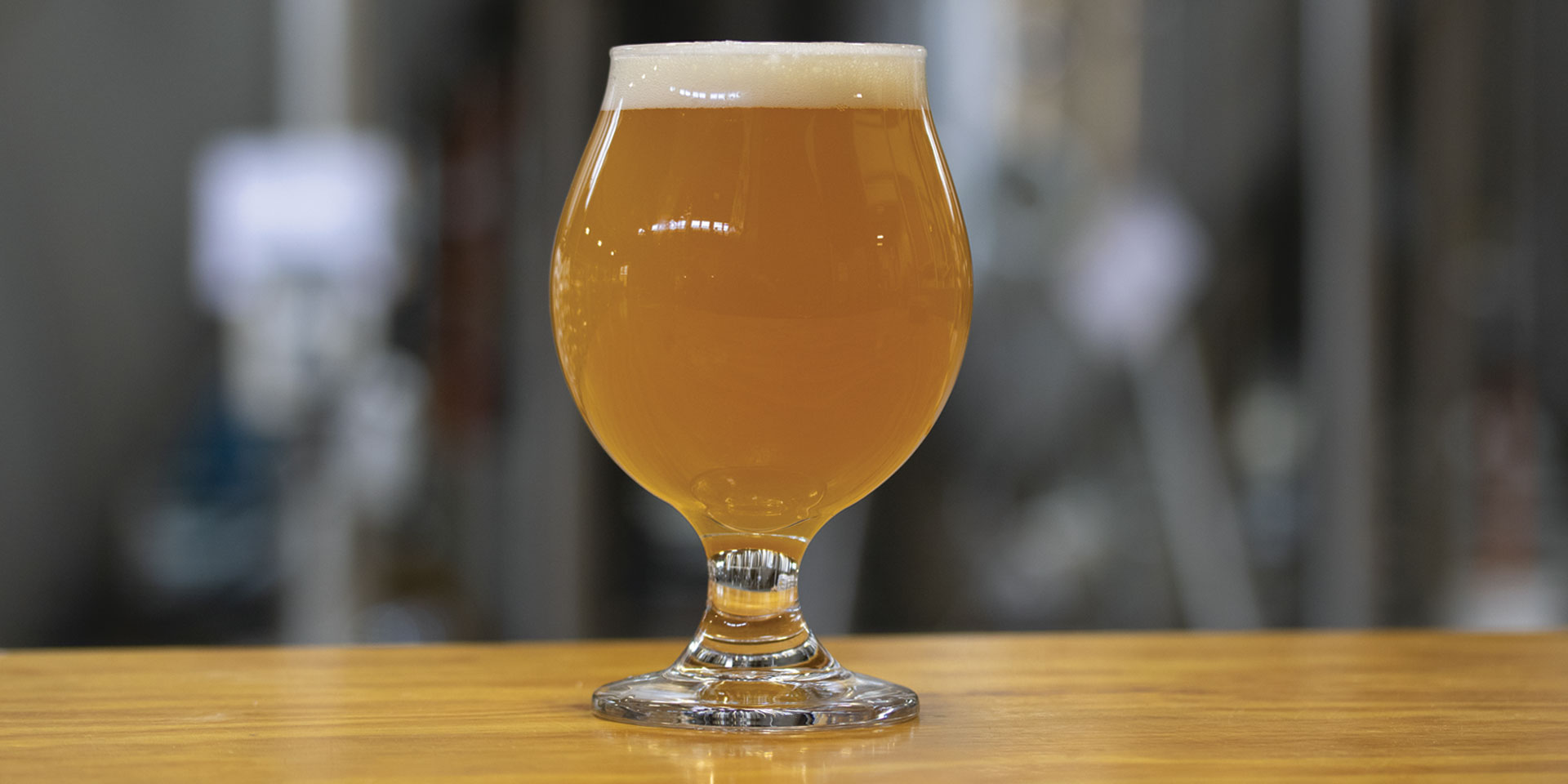 The last few years there has been an influx of unusual brews that have now become the trend. Everything from fruity brews, to ultra-concentrated hops in beers, to mouth puckering sour beers. Ever wonder where these enticing beverages such as sour beers came from? Or about what makes a sour beer sour? Read on to find out more about sour beers!

Sour beers, a tradition in Belgium and parts of Germany, have been around for centuries and may be what most beer was like before microbiologists and refrigeration got involved.  Over the last 150 years, brewers have worked to isolate and maintain pure yeast strains [Saccharomyces cerevisiae and Saccharomyces uvarum] that ferment in predictable ways, with a specific flavor and aroma profile. Controlled, pure strain fermentations avoid the bacteria and wild yeast that sour beer brewers encourage.  Lambic, Flanders Red, oud Bruin, Gose and Berliner Weisse are all styles that depended on wild yeast and bacteria that would normally be considered beer spoilers.  The advent of reliable refrigeration meant that fermentations could stay in the temperature range of selected yeast strains and avoid spoiler growth.  Sour beer brewers generally ferment without refrigeration, needing ambient conditions to cool the liquid extract [wort] from the mash.  After boiling in the kettle, wort is transferred to open fermenters, where microflora in the air ferment the cooling wort, producing acidic, sour beer.  Wild yeast, and various bacteria will consume maltose, dextrins and other sugars in wort, giving off sour, estery, earthy and buttery flavors.  The main contributors are Brettanomyces, a wild yeast strain given to barnyard flavors, Lactobacillus, a bacterium that produces lactic acid, and Pediococcus, a bacterium that produces sour as well as buttery flavors.  Enterobacter and Acetobacter also contribute to the fermentation, but are usually less noticeable than the aforementioned microorganisms.  The full list of the components of spontaneous fermentation is much longer and depends upon the local microflora.1

Belgian brewers still employ a number of techniques to achieve the desired sour effect.  Many lambic breweries create a cloudy wort deemed suitable for the long fermentation that is part of barrel aging.  Called the turbid mash method, the mash temperature is increased through protein and starch conversion stages with hot water.  During the mash, a portion of under dough, or wort with malt flour, is pulled from the bottom of the mash tun, heated to 185-190⁰ F, then returned to the mash.  Although the process is counter intuitive, meaning that the goal of regular brewing is to convert the mash completely, it is believed that the starch and unconverted protein from the turbid mash is utilized by the mix of bacteria and wild yeast later during fermentation.2  Wort is then run off to the kettle, boiled, and sent to a coolship.  The coolship is an open vessel that looks like a large, shallow pan.  Wort cools to ambient temperature and the microflora present in the brewery environment begin spontaneous fermentation.  After an appropriate interval, the inoculated wort will be transferred to wooden barrels for 12-24 months.3   Sometimes fruit is added to the barrels to balance the sour character.  The wooden barrels that hold the lambic or other sour beer will be blended for a final bottling or racking into kegs.  It is the skill of the brewer that will determine the right blend of old and young aging beer.

Breweries making sours in this country use a number of methods that will yield a finished beer that is ready in months rather than the years it takes for many Belgian barrel aged sours.  Some brewers allow the mash to sour before running wort off to the kettle.  This process can include inoculating the mash, primarily with Lactobacillus, letting the bacteria get a head start.  Other brewers use the flora on the grain to achieve acidity.  Similarly, wort can be allowed to sour in the kettle at 90 - 110℉ with an inoculation before being boiled and transferred to a fermenter.  These two methods usually demand as much as 12 hours for the mash or wort to sour sufficiently.  Wort pH will drop from 5.2-5.6 to as low as 3.2-3.6 at the end of this phase, an indication of the amount of lactic acid that has been produced.   A variation of this method involves a normal mash, kettle boil and knockout to a fermenter.  Regular brewer’s yeast is pitched into the batch, the beer is allowed to end ferment, then bacteria or wild yeast is added.  Yeast suppliers make various combinations of Lactobacillus, Brettanomyces and Pediococcus available for this method.  Sour beer made this way can be held in a closed fermenter until deemed ready, or transferred to barrels for further maturation.  The time involved with souring varies, but most studies on the subject indicate many months are needed for complete fermentation as shown in the following graph.4 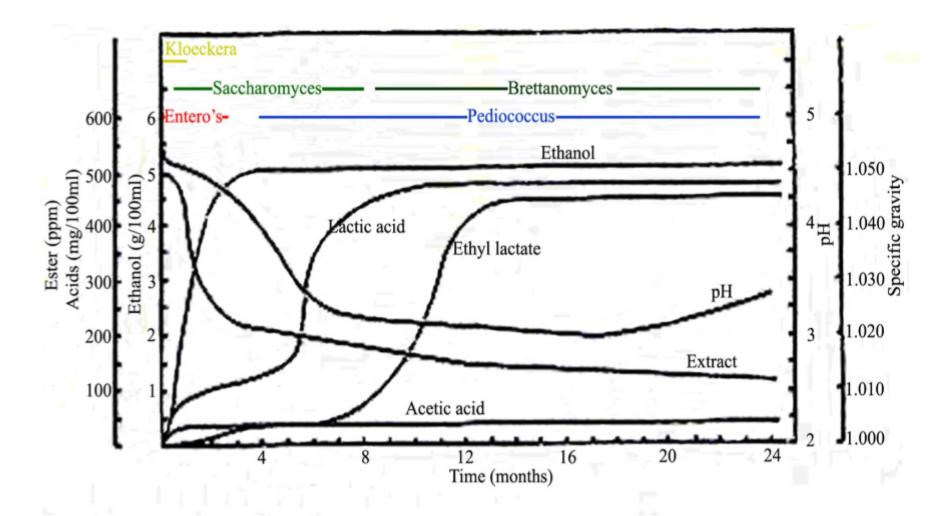 pH During the Souring Process

A normal part of brewing should include checking pH of the water, mash, wort and beer.    Acidifying the water and mash during the brewing process promotes enzymatic activity for starch and protein conversion.   Making a sour beer requires further attention to specific phases of the process.  pH readings after the inoculation phase of souring will show how effective the effort has been.  Brewers souring in the kettle will hold the wort at Lactobacillus growth temperature [85-100℉] until the target pH is reached [3.2-3.6].  Acidifying the wort before inoculation of bacteria [4.0-4.5] may help inhibit the growth of undesirable bacteria and yeast.5  Overall, the brewer wants to know that a lower than normal pH has been achieved, ensuring a sour product,  targeting values as low as 3.1.

A more precise method of determining the amount of acid produced during the souring process is titratable acidity.  Titration is a common laboratory method of quantitative chemical analysis that is used to determine the concentration of an identified analyte.  In the case of beer, total acidity is normally ascribed to lactic acid, the major byproduct of Lactobacillus fermentation.  While pH is an important indicator, it differs from total acidity.  The relationship of pH to acidity is complex since pH is the measurement of hydrogen ion activity and acidity is the concentration or buffering capacity of a particular acid.  Additional acid may not appreciably affect the pH because compounds such as phenols may act in a buffering capacity to prevent changes in the pH.  The expected relation between pH and TA is such that higher acidity usually correlates to lower pH.

The following chart highlights the relation between pH and total acidity in sour beers from a California brewery.6 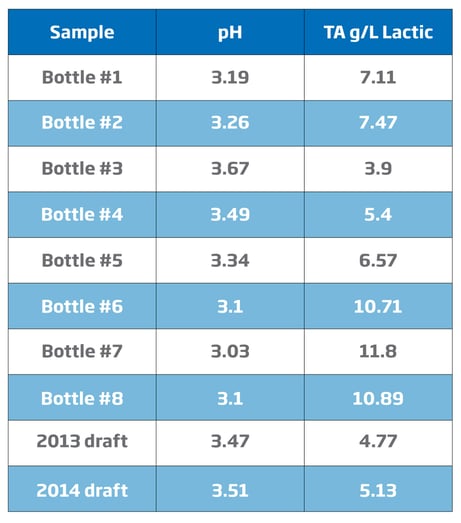 Since most of the sour beer programs involve racking the beer to multiple 60 gal wine or whisky barrels, brewers have the task of combining a number of barrels to make a large enough batch for bottling or kegging.  Brewers will make a sensory evaluation of the beer at hand to determine which barrels are ready for blending.  Knowing the pH and the TA of the barrel helps when making decisions for blending beer for bottling or kegging.  A number of breweries now regularly take both measurements before blending various barrels.

Add just the right amount of pucker to your sour beers. For assistance in choosing the best pH and titration options, please contact us using one of the channels below.