In the wine industry, one of the most important components in the grape, after sugar, is nitrogen. It's important to the development and stability of wine, and is an essential nutrient for yeast, allowing for healthy and timely fermentations.

During the growing season, nitrogen is taken up by the plant in several forms. Those nitrogenous compounds that play a role in yeast metabolism are collectively known as yeast assimilable nitrogen (YAN). YAN consists primarily of free amino nitrogen (FAN), mostly from primary amino acids and ammonia nitrogen. Each is present in grapes ranging from 28 to 336 mg nitrogen from amino acids/L and 24 to 209 mg ammonia nitrogen/L respectively. Nitrogen available for yeast can vary by region or vineyard and amino acid content of fruit can be affected by mold. 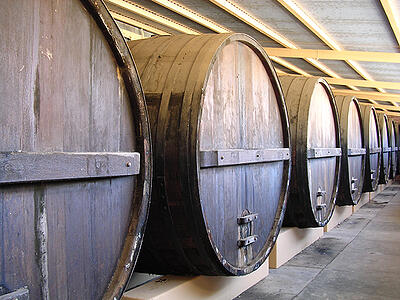 It is important to have an appropriate level of YAN going into fermentation. Deficiencies in yeast assimilable nitrogen can lead to sluggish or stuck fermentations that may result in unwanted byproducts. Under optimal conditions, a minimum YAN concentration of 140 mg total nitrogen/L is recommended with upwards of 400 to 500 mg total nitrogen/L suggested for a maximum fermentation rate. If YAN deficiencies are found and fermentation problems arise, grapes must be supplemented with assimilable nitrogen through the addition of ammonium salts, such as diammonium phosphate (DAP). This is often combined with other yeast nutrients in the form of products such as Fermaid.

YAN can be monitored by reacting a pH adjusted wine sample with formaldehyde dissolved in water, commonly known as a formol solution. Formalin, a type of formol solution, is a mixture of water and 37% formaldehyde by weight. When formalin reacts with available nitrogen in the wine sample, the pH of the sample decreases. The sample is then titrated pH 8.2 with a base. The result is the nitrogen available for the yeast in the wine sample.

A mid-sized winery was looking for a way to measure the YAN of their incoming grape juice and musts. Since they also commonly measured pH, titratable acidity (TA), and sulfur dioxide, amongst other common wine parameters, the Automatic Potentiometric (pH/mV/ISE) Titration System - HI902C, which comes with two pumps and two burettes, was recommended as a complete wine lab solution.

The customer was surprised at how fast and simple a formol titration was to complete when performed with the titrator. They were happy that the same pH electrode and NaOH titrant from their acidity titrations could be used for the formol method. The feature they valued most was that the pH adjustment of their initial must sample could be automated by using the linked titration feature. They were advised to make a rough pH adjustment of the must to pH 6 by addition with NaOH, and then utilizing the titrator to accurately adjust the pH per the standard method. The fixed endpoint method allowed for titrant to be precisely dosed to pH 8.0 and not dose past the endpoint, a problem common with manual titrations, due to the very small dosing capabilities. The first pH adjustment method was linked to the formol titration method.

One of the HI902C's customization features is to allow the user to start the titration immediately following the pH adjustment and formalin addition, after a specified interval of time, or to manually start. The customer appreciated the second burette and dosing pump, which allowed for a separate titrant to be utilized for the sulfur dioxide titration. Changing a burette from one titrant to another involves purging, cleaning, and priming of the burette, which is timely and wastes valuable titrant. The option to expand to a two burette/ two pump system was extremely valuable. Overall, they felt the titrator was simple, versatile, and a great tool for their laboratory needs.