Determining the Alkalinity of Cocoa Ash

Chocolate is made from cocoa beans and, although it was originally a delicacy, is enjoyed in many forms all over the world. Cocoa was widely used in South America by the Mayans, and later was brought to Spain where its popularity grew. Over time, “chocolate houses” started opening throughout Europe, followed by the production of confections from cocoa beans. Today more than 3 million tons of cocoa beans are consumed annually, with 90% being produced on small farms. Consumption of cocoa beans varies from chocolate cake to hot chocolate, and includes a myriad of treats enjoyed around the globe.

Cocoa trees can be found along the equator. Because of the consistently warm and humid climate, cocoa trees produce pods all year round. However, there are only two large harvests each year. During harvest, the pods are handpicked, opened, and emptied of the pulp and seeds. The seeds are raked into piles or placed into wooden boxes and left to ferment for a period of 9 days. Following the fermentation stage, the seeds are dried, packed into burlap sacks, and sent to manufacturing plants. At the manufacturing plant, the seeds are crushed and separated from the husks, after which they are referred to as nibs. Nibs are then ground into a thick paste called chocolate liquor which is used to create cocoa powder, cocoa butter, and unsweetened chocolate.

An ash alkalinity test is commonly performed after ashing to determine the level of purity. As the cocoa powder goes through the ashing process, any citrates, tartrate and malates present are converted to carbonates which will increase alkalinity. The determination of the alkalinity of ash not only indicates the carbonates present, but can also indicate potential mineral adulteration of the cocoa if the alkalinity is excessive. Ash alkalinity is expressed as percent potassium oxide (K₂O) by weight. High quality cocoa powder has an ash alkalinity of less than 1% K₂O/100 g ash and can range up to 6% K₂O/100 g ash.

A food education program contacted Hanna Instruments about characterizing the quality of their incoming cocoa powder. The customer wished to follow method AOAC 972.15 for the ashing process of cocoa, whereby a 2-5 gram aliquot of cocoa powder is incinerated at 600°C in order to burn off all organic matter and volatile components. The resulting ash is dried and weighed to determine the ash content.

After ashing, the education program then followed AOAC 975.11 to determine the alkalinity of water soluble and insoluble ash of their cocoa powder. To test for alkalinity of water soluble ash, the ash is mixed with 10 mL deionized water and heated to a near boil. The solution is washed through a filter and titrated with 0.1M hydrochloric acid (HCl) to the methyl orange endpoint of pH 3.8. To test for alkalinity of insoluble ash, the ash remaining in the filter from the previous step is recovered and ignited for 30 minutes at 600°C.

The sample is cooled and additions of 10 mL deionized water and 10 mL 0.5M HCl are made. Then, the sample is heated until just boiling and then rinsed into a beaker with deionized water. The beaker is then placed in a boiling water bath for 15 minutes with constant swirling before titrating. The excess HCl is then back titrated with 0.1M sodium hydroxide (NaOH) to the bromocresol green endpoint of pH 4.5. Results for both soluble and insoluble ash are then reported as alkalinity in mL acid/100 g sample. 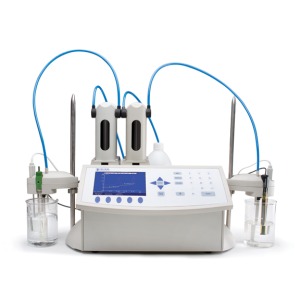 The Automatic Potentiometric (pH/mV/ISE) Titration System - HI902C with two pumps and two burettes was a great fit for this customer as it allowed them to determine both soluble and insoluble ash alkalinity. The titrator was offered with the Refillable Combination pH Electrode with BNC Connector - HI1131B pH electrode because of its glass body construction and double junction reference.

As the education program regularly utilized two different titrants for ash alkalinity, the use of two dedicated burettes saved on time and chemical costs since they did not have to rinse and prime the burette with a new titrant when switching methods. The customer appreciated the ability to create two user methods to fixed endpoints for their ash alkalinities, with customizable generic calculations in order to report in their preferred results units of mL acid/100 g sample. They opted to utilize the “Linked Method” feature of the titrator in which they were able to first titrate the alkalinity of water soluble ash, change the sample beaker and then manually prompt the titrator to start the titration to determine the alkalinity of insoluble ash.

The customer appreciated that by utilizing a “Linked Method” the reports for both water soluble and insoluble alkalinity values referenced the other, for easy data traceability. The ability to transfer the values via USB also allowed them to manage their data and monitor the quality of cocoa received over time.