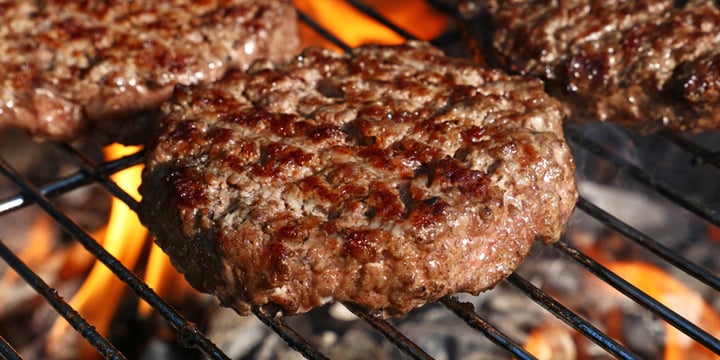 It's finally grilling season! Whether you are barbecuing in your backyard or waiting for water to boil on the stovetop, temperature plays a key role in preparing a meal. You might not have thought about the impact that temperature can have on the food you eat, however it can affect several factors such as the quality, flavor, and freshness.  If not monitored closely, the wrong temperature could pose serious health risks for consumers.

In this article, we will discuss the role that grilling temperature plays in food safety. We also will review what temperatures you should be cooking at as well as how temperature affects the physical properties of meat.  We want to make sure that the next time you go to prepare for a barbecue your food not only tastes delicious but is safe to eat too!

In technical terms, temperature is the numerical measure of hot and cold by detection of kinetic energy or the movement of molecules. It is the most commonly measured parameter and can be measured in different units including Kelvin (K), Celsius (°C), or Fahrenheit (°F).

Consumers are often confused about how to keep their food safe especially when it comes to temperature. The U.S. Department of Agriculture's Meat and Poultry Hotline receives more than 80,000 calls a year. The questions people ask range from how to store food safely to what is the proper handling and preparation of food products like meat, poultry, and eggs.

The temperature of food should be monitored closely to keep the growth of pathogens and microorganisms under control. Temperature is important to ensure that the quality of the food is not compromised and that it does not spoil. Food products must be kept at the correct temperature while being stored, displayed, and transported. If the temperature is not properly controlled, bacteria can grow to dangerous levels in just a few hours.

Bacteria exist everywhere in the natural world- in the soil, air, water, and the foods we eat. When exposed to ideal conditions (meaning they have enough nutrients, moisture, time, and favorable temperatures), they grow rapidly, increasing in numbers to the point where some can cause illness. Understanding the important role temperature plays in keeping food safe is critical. Bacteria that is often associated with improper food handling include:

One simple rule to remember is to keep hot food hot and cold food cold.

Use the chart below and a food thermometer to ensure that meat, poultry, seafood, and other foods that need to be cooked reach a safe minimum internal temperature. Remember, you can’t tell whether meat is safely cooked just by looking at it. Any cooked, uncured red meats – including pork – can be pink, even when the meat has reached a safe internal temperature. 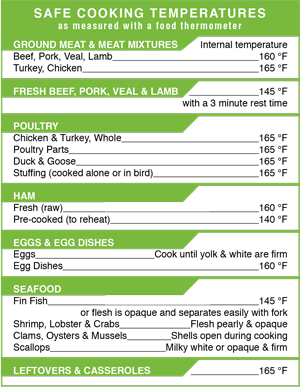 Many of you have probably heard that you should let the meat "rest" after taking it off the grill, but what exactly does this mean?  For those of you who aren't familiar with this cooking technique,  allowing the meat to "rest" refers to the wait time that exists after you have removed it from the grill and before you actually can cut into the meat.  This is an important step for two reasons:

1. Just because we have taken the meat away from the heat, doesn't mean it has finished cooking. The internal temperature of meat will continue to rise even after you take it off of the heat source, continuing to kill any harmful bacteria.

What is actually happening when you cook meat?

There is a lot happening when you cook your food! Temperature can change both the physical and chemical properties of food products.

Meat is actually the muscle tissue of an animal and is made up of about 75% water, 20% protein, 5% fat, carbohydrates, and assorted vitamins and minerals. Of course, depending on the type of cut and the animal, these numbers can differ significantly. Muscles are made of bundles of cells called fibers which contain protein filaments of actin and myosin that slide past one another, producing a contraction that changes both the length and the shape of the cell, resulting in motion.

What happens when meat is cooked?

As temperature increases during cooking, the collagen bonds that hold the fibers together begin to break down or denature. Denaturation begins at roughly 105°F and continues upwards to temperatures in excess of 200°F.  You can actually see denaturation occurring as the meat changes color from red to brown.

Between 105 and 122°F, the calcium proteins begin to denature and lose activity. Since enzyme activity increases up to those temperatures, slow cooking can provide a significant aging effect during the cooking process. At 125°F meat is rare and should be seared quickly to kill any surface bacteria.

Above 125°F, meat begins to develop a white opacity as myosin, which is sensitive to heat, denatures. When coagulation scatters light,  red meat becomes pink. At 130°F is when the meat moves from rare to medium-rare.

Towards 140°F, the red myoglobin (iron/oxygen-binding protein) breaks down and turns into a hemichrome, which is tan in color. Visually, meat turns from pink to brown and with further cooking to grey. Water, along with sugars, salts, and other cellular components in the meat, becomes that flavorful juice associated with cooked meat. At this point, the meat juices are released and the size of the meat will shrink as it cooks to medium-well.

At 160°F, the meat is considered well-done. The connective tissue has begun to condense, water is repelled and what is left of the proteins constricts. This is what gives you well-done meat which is tough and has a dry texture.

The next time you head off to fire up your grill, just remember that temperature plays a crucial part in making dinner. Not only does temperature change the meat physically and chemically, but adhering to good grilling practices will ensure that your meal is safe for everyone to eat!