Measurement of Conductivity in Yogurt

The regular consumption of dairy products provides numerous health benefits, such as strengthening bone health, encouraging proper digestion, and reducing the risk of certain infections. Yogurt is one of the most popular types of dairy products consumed worldwide. Depending on the desired fat content of the finished product, yogurt is produced with milk, cream, or powdered milk products.

Any additional ingredients, such as stabilizers or sweeteners, are mixed in with the milk products and heated for pasteurization. For effective pasteurization, the heating process must be performed at temperatures near 93°C (199.4°F) for a time period ranging from 30 seconds to 30 minutes. Due to the differences in fat content of milk and cream, the ingredients will naturally separate after the pasteurization process; to prevent this, the mixture is homogenized.

Homogenization involves destroying the fat globules by crushing them, allowing even distribution of the fat particles so the two liquid phases merge. The next step in yogurt production is fermentation; this occurs in designated tanks that are heated to 45°C (113°F). It is during the fermentation stage that live bacteria are added to the mixture, namely Streptococcus thermophilus and Lactobacillus bulgaricus. These bacteria convert the sugar naturally present in the milk, as well as any present from added sweeteners, into lactic acid. The lactic acid is responsible for the thickening of the yogurt, as well as the tart flavor. The length of the fermentation stage is generally between 6 and 20 hours, but ultimately depends on the type of yogurt being produced.

Electrolytic conductivity, commonly abbreviated as EC, is the measurement of a substances ability to carry an electrical current. Dissolved salts are the main contributors to a solution’s conductivity. During fermentation, the production of lactic acid converts colloidal calcium and magnesium into their ionic forms. The calcium and magnesium ions are able to carry a current through the fermented yogurt base, thus increasing the EC. By monitoring how EC changes over time, fermentation can be monitored within a batch of yogurt and be used to determine when fermentation has finished; after an initial increase of EC in the beginning of fermentation, the EC stabilizes indicating the end of lactic acid production.

A large yogurt manufacturer contacted Hanna about using a portable conductivity meter to help determine when fermentation was complete in their yogurt product. The Portable Low Range EC/TDS Meter - HI99300  (which comes with supplied with a two-ring conductivity probe for low range EC and TDS) was offered to fit the customer’s needs.

This combination proved to be a great solution, as the HI99300 features a built-in temperature probe for automatic temperature compensation (ATC) from 0 to 60°C (32 to 140°F); as fermentation is performed at 45°C (113°F), the customer felt assured that their EC readings were being appropriately adjusted in terms of temperature. 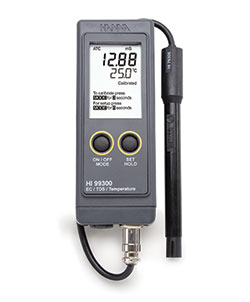 Also of importance to the customer was the ease of cleaning and maintaining the probe. As a two-pole EC probe, a simple rinse of purified water was needed for cleaning to provide consistent, reliable readings. The customer also appreciated the ease of a one-point calibration with the HI70031P 1413 µS/cm Conductivity Standard solution. The one-time use sachets afforded a portable calibration so the customer could easily perform their calibration on the production floor. The sachets also assured the customer that each calibration was performed using a fresh, accurate solution.

Furthermore, it was also necessary that the meter was waterproof; the HI99300 is rated for IP67 conditions, where the “6” indicates a dust tight product and the “7”, immersion in water up to 1 meter. Overall, the yogurt manufacturer was pleased with the ease of use and portability of their EC meter purchased from Hanna.