Though most commonly associated with the ozone layer, ozone (O₃) is a strong oxidizer and therefore an effective disinfectant.

Once pathogens have been removed during wastewater disinfection, any residual disinfectant must be removed prior to discharge into a natural water body. For some disinfectants, this requires the addition of extra chemicals. For example, residual chlorine may be removed by adding sodium bisulfite to the water.

However, the natural instability of ozone allows it to break down to oxygen without the need for additional chemicals, making it ideal for wastewater treatment. The lack of harmful byproducts, high efficiency, and exceptional removal of bad odors are among the many reasons wastewater plants incorporate ozone disinfection systems. In Europe, ozone is a very popular disinfectant used in wastewater, second only to chlorine. In addition to wastewater treatment plants, ozone has been utilized in other industries, including air purification, clothing sanitation, and food preservation.

Due to its instability, ozone is generated on-site at the wastewater treatment plant, and has a lifespan of only ~20 to 90 minutes, at which point it reverts back to oxygen. The two most popular methods of ozone generation are the UV light and corona discharge methods. The UV light method splits oxygen molecules with ultraviolet light, resulting in free oxygen molecules (0) that attach to other oxygen molecules (0₂) to form ozone (0₃).

Wastewater plants that utilize this method have generators containing ultraviolet lights and an oxygen feed tube. The generated ozone is captured and then pumped into a contact tank where it mixes with the wastewater and reacts with pathogens to disinfect. This method is primarily used in smaller operations because of the low startup cost.

The corona discharge method is similar to the UV light method. Instead of UV light, electrical discharges are used to split O₂ molecules into free oxygen; this then facilitates bonding between molecules to form ozone. Filtered, dried oxygen gas is fed into a chamber where a controlled voltage is discharged to rupture the oxygen. The generated ozone gas is then captured and delivered to a wastewater contact tank. The corona discharge method is preferred in larger operations due to increased disinfection efficiency compared to the UV method.

A wastewater treatment plant contacted Hanna Instruments for a means of spot-checking ozone concentration in their treated water after ozone destruction. The treatment plant was using a UV ozone removal system in compliance with their discharge permit, requiring all ozone be removed before discharge. The customer required a secondary test for ozone to validate their inline system, to ensure the ozone was sufficiently removed. The customer wanted a simple and accurate testing method to test for ozone, and was also in need of updated instrumentation for tests such as chemical oxygen demand (COD). Hanna Instruments suggested the Benchtop COD and Multiparameter Photometer for Water Analysis - HI83399 for their application. 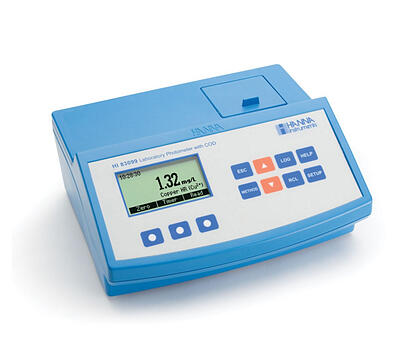 The HI83099 measures ozone from 0.00 to 2.00 mg/L with an accuracy of ±0.02 mg/L ±3% of the reading using the DPD method, in which a pink color change forms in the presence of ozone. The customer appreciated that the HI83099 was versatile and contained 47 colorimetric water quality parameters, including chemical oxygen demand (COD). The PC connectivity allows the user to easily transfer data to a computer and neatly organize saved measurements. The tutorial mode also provides helpful information for users unfamiliar with some of the photometer methods. As a result, the customer was able to precisely measure ozone in their wastewater and improve efficiency both in the plant and in the laboratory.