Hummingbirds are a popular breed of birds for hobbyists to observe in their gardens. Hummingbirds are some of the smallest birds in the world, located only in the Americas, with most species native to Central and South America. Despite their small size, hummingbirds have the fastest metabolism of any animal on the planet. For comparison, their metabolic rate is 100 times faster than that of an elephant.

Due to their increased metabolism, hummingbirds require frequent nourishment and can feed 5 to 8 times per hour. Their high metabolism also forces them to conserve energy whenever possible, so hummingbirds often enter a sleep-like state called torpor when eating is not possible, such as at night or during cold, rainy days.

Hummingbirds’ diets consist mostly of flower nectar and a protein source, like small insects. Mosquitoes, flies, and small beetles are popular sources of protein as they are easily swallowed whole. Nectar is a sugary fluid secreted by plants to encourage pollination, comprised primarily of sucrose, fructose, and glucose, as well as small amounts of protein, sodium, and potassium salts. The nectar concentration of flowers varies based on the species, meaning that birds will feed at different frequencies based on a flower’s nectar concentration.

Hummingbird feeders are often utilized to attract hummingbirds to yards and gardens in the warmer months. The first commercially available hummingbird feeder was designed in the late 1920s out of a modified glass bottle. Hummingbird feeders are typically colored red to mimic the color of flowers, and have small wells that the birds drink synthetic nectar from. Based on drinking rates and mechanisms of feeding, research has determined the optimal sucrose concentration of hummingbird nectar is between 35 and 45% sucrose.

Hummingbird nectar is available both commercially in stores and can also be made at home using ordinary table sugar (sucrose) and water. Store-bought nectar is made primarily with sucrose and is available in multiple forms, including powders, liquid concentrates, and ready-to-use liquid forms. Often, preservatives such as citric acid and sodium benzoate are added to synthetic nectar to increase shelf life. 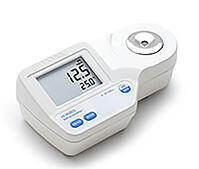 A pet food manufacturer contacted Hanna Instruments in regard to testing the concentration of their premade hummingbird nectar. They wanted to ensure the accuracy of their bottle label, which states that the nectar contains no less than 10% sucrose. The customer wanted a quick and accurate way to verify sugar content with an easy-to-use, portable meter for use on the production floor. Hanna Instruments suggested the Digital Refractometer for Brix Analysis in Foods - HI96801.

Brix is a common unit of sugar measurement that refers to the percent sucrose in a solution by weight. The portability of the instrument and the small sample size required for a reading (2 metric drops) fit the customer’s requirement for use on the production floor. The customer appreciated the 0.1% Brix resolution and high accuracy of ±0.2% Brix of the HI96801. The simple operation and quick 1.5-second response time allowed the customer to perform replicate measurements to ensure they obtained representative results.

The customer also appreciated the wide measurement range of the HI96801 from 0 to 85% Brix, as they also manufactured some nectar concentrates ranging from 60 to 80% Brix. The HI96801 allowed the customer to increase efficiency on the production floor and verify the quality and consistency of their hummingbird nectar products.