Maple syrup is a popular commodity made from the sap of maple trees. This type of syrup is widely used as an ingredient in cooking and baking due to its distinctive ­flavor. The majority of maple syrup production occurs in North America, however maple syrup may be produced wherever maple trees grow.

Maple syrup production season begins in late February when maple trees are tapped; the alternating freezing and thawing temperatures promotes the production of sap in maples. Once tapped, trees will produce between 35 and 50 liters of raw maple sap each season, which can last up to eight weeks.

Brix of Maple Sap and Syrup

It's no secret to sugarhouses that it takes above 40 volumes of maple sap to produce 1 volume of maple syrup. In other words, we need to boil down 40 gallons of sap just to make one gallon of syrup. This is necessary because maple sap only contains between 1.5-3.5% sugar and finished maple syrup contains about 66% sugar! Sugarhouses therefore have to evaporate the water in the sap to concentrate the sugars to form the syrup we love.

A maple syrup producer reached out to Hanna Instruments to inquire about a method for measuring sugar content of their syrup throughout the maple sugaring process. In the past, the customer had been using manual refractometers, but required multiple refractometers due to the wide range of % Brix measured at various stages in the process. Hanna offered the Digital Refractometer for Brix Analysis in Foods - HI96801.
This refractometer converts the refractive index of a syrup sample to % Brix. The conversion is based on tables found in the ICUMSA Methods Book (International Commission for Uniform Methods of Sugar Analysis) that documents the changes in refractive index with temperature for a percent by weight sucrose solution. 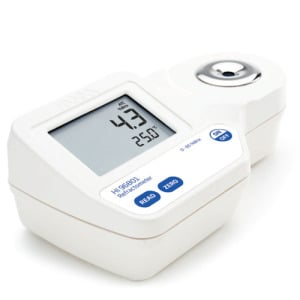 The HI96801 refractometer is capable of measuring Brix between 0 and 85% with an accuracy of ±0.2%. The HI96801 features a large dual-level LCD screen clearly displays results along with temperature, eliminating the uncertainty that occurs with mechanical refractometers.
Measurements are performed with a sample size as small as 100 microliters and the results are displayed within 1.5 seconds. Overall, the customer found that the digital refractometer was an intuitive and powerful addition to the rest of their maple syrup equipment.