The art of bread making has a rich and extensive history, with ancient roots that can be traced back at least 30,000 years. Today, the cultural and nutritional importance of bread is still significant as it continues to shape culinary identities worldwide. Generally, the process of bread making remains unchanged. Unleavened breads, such as Matzoh, are comprised of only flour and water. Upon mixing, gluten protein is formed, giving the bread structure and elasticity. After the dough is kneaded, it is baked immediately and results in a thin “ flat bread”. In comparison, leavened bread is that which rises during the baking process due to the addition of a leavening agent.

The first use of yeast as a leavening agent is believed to be accidental. It is thought that flat bread dough was left out on a warm day, causing naturally occurring yeast in contaminated flour to ferment before baking. During fermentation, enzymes in the yeast cause the breakdown of starch molecules into simple sugars. The yeast then metabolizes these sugars and creates carbon dioxide gas and alcohol as byproducts. The gas molecules expand within the dough’s gluten structure, causing it to rise.

In the primitive days of leavened bread making, there was little known about yeast and its function. Many thought the leavening process was merely a baffling phenomenon. In turn, there was limited control over the yeast during bread making. This resulted in very inconsistent bread quality. It wasn’t until the invention of modern microbiology that the function and regulation of yeast was fully understood.

The presence of salt (NaCl) in dough is an important factor that helps to regulate yeast. Salt in dough effects the strength of its gluten structure. Dough with low concentrations of salt is sticky and cannot withstand kneading. A sufficient amount of salt will strengthen the gluten structure in dough, permitting better storage of carbon dioxide and therefore, uniform and adequate leavening. Salt also slows leavening by drawing water out of the yeast cells, resulting in softer, tastier bread. In addition to improving leavening, salt also preserves bread by attracting moisture from the air and enhances the flavor. For these reasons, most dough recipes suggest 1.8-2.0% salt based on the weight of flour.

A customer contacted Hanna Instruments looking to determine the salt content of their bread per AOAC International Official Method of Analysis 926.04 and 971.27. Due to the sampling requirements stated in the AOAC 926.04 Preparation of a Bread Sample, Hanna recommended the Automatic Potentiometric (pH/mV/ISE) Titration System - HI902C.

Per AOAC Method 926.04, the customer was instructed to dry a 2 -3 mm thick piece of bread until brittle, grind, and then pass it through a No. 20 sieve. Next, the customer followed AOAC Method 971.27 Determination of Sodium Chloride in Low-moisture Sample, blending 50g of bread sample with 450g of deionized water, and then mixing a 50g aliquot with dilute nitric acid. From there, the sample was then titrated against 0.1 M Silver Nitrate solution using the HI4107 Chloride Combination Ion-selective Electrode as the indicating electrode.

To the customer’s relief, the HI902C permits user methods to be created and customized based upon the sample matrix and sample preparation, so as opposed to having to manually calculate the dilution, the customer could simply fill in the parameters under the Dilution Option feature. The customer also valued that due to the 0.1% accuracy of the dosing system and specific features in the Method Options, such as Dynamic Dosing and Signal Stability, the titrator produced accurate and quick results; this allowed them to identify production problems in a traceable, efficient manner. Furthermore, the storage capacity of 100 reports and USB transferable methods and reports provided the customer with extra data management flexibility. Ultimately, the HI902C proved to be a valuable tool for maintaining high standards throughout the bread production process. 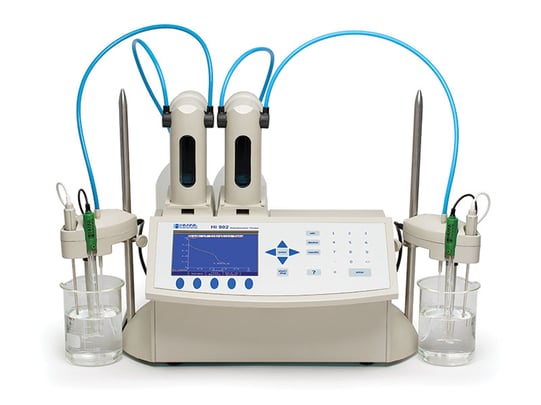