When trying to mimic environmental conditions in a lab, a myriad of factors come into play. From pH to temperature, nutrient levels to salinity, many parameters must be considered. In recent years, bioremediation has become popular as a means of environmental pollution cleanup, especially in marine environments. One bioremediation technique is to utilize bacteria to break down harmful pollutants, such as organic solvents and fuels. However, as marine environments are constantly changing, it can be hard to pin down the exact conditions where these marine bacteria thrive.

While bacteria are typically hardy organisms, their optimal growth is supported by specific environmental conditions. Two of the most critical parameters that affect bacterial growth are pH and salinity. In order to determine the natural presence of bacteria in an area that has been contaminated, the environmental bacteria must be successfully cultured. Bacteria are cultured using bacterial growth mediums known as media. A sample is taken from the natural environment and is placed on the prepared media. Ideally, the bacteria in the sample will thrive and multiply on the media, allowing the analyst to identify the different organisms present. However, if the conditions of the media are not ideal, the bacteria will not culture.

Many commercially available media have a pH of 7 and varying salinities; this can cause issues during the growth process for marine bacteria, as they are adapted for seawater. Seawater tends to be slightly alkaline (pH 7.5 to 8.5) and can have a salinity ranging from 0.5 parts per thousand (ppt) in brackish environments to 35 ppt in ocean environments. By measuring the conditions of the target natural environment, key environmental parameters such as pH and salinity can be determined and replicated in the bacterial growth medium. Being able to tailor pH and salinity is important to the growth of microorganisms as the microfauna depend on both for sustaining biological functions. 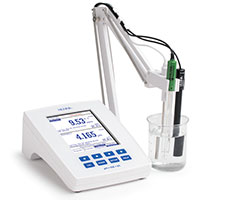 A professor conducting environmental monitoring of a contaminated stretch of a sandbar near the mouth of an estuary was looking for a way to improve his growth rate of bacteria cultured from the estuary. Even though he followed a standard protocol, the professor was concerned that the conditions in the growth media, particularly the pH and salinity, were not on par with what the marine bacteria needed to achieve peak growth.

He knew that his samples came from an area with a large variation in environmental dynamics due to the tidal cycle in the estuary, and had procured samples at various times of day from the same location to analyze and determine the average environmental conditions. Hanna Instruments recommended the Laboratory Research Grade Benchtop pH/mV/ISE and EC/TDS/Salinity/Resistivity Meter - HI5522.

The customer appreciated that the HI5522 was able to measure pH and salinity from the same meter, conserving valuable bench space. The HI5522 is customizable with two channels that can be simultaneously viewed; this allowed the professor to read both pH and salinity at the same time, which cut down on run time per sample. The ORP and ISE functionality of the meter lent itself well to other work conducted in the educational/academic research laboratory. The CAL Check™ feature for the pH mode made the meter incredibly user-friendly, alerting students of their electrode condition and ensuring they had obtained a good calibration, cutting down on the margin of error.

Not only was the customer able to utilize the meter to test the marine samples he had obtained, he was also able to check the same parameters in the liquid agar as the media was prepared. The professor also purchased the Flat Tip pH Electrode for Skin and Surfaces with BNC Connector - HI1413B for a final pH check of the agar plates after autoclaving to ensure the media remained hospitable to the desired marine bacteria. The HI5522 provided a comprehensive solution for the professor’s pH and salinity testing needs.