Salinity is one of the most widely tested parameters in saltwater aquariums. It is often the first water parameter many aquarists test for as it is crucial in making artificial saltwater. There are many ways to measure salinity, some more accurate than others. In this blog, we will discuss what salinity is, its importance in saltwater aquariums, and how to take salinity measurements.

Salinity is the measurement of all the dissolved salts in water. Seawater is a complex chemical solution that contains almost every known element at varying concentrations. Seawater contains organic and inorganic chemicals, and a wide range of trace elements. Some elements are more important than others in what defines salinity. The predominant elements that exist are chloride, sodium, sulfate, magnesium, calcium and potassium. Chloride generally exists in about 19,000 ppm and sodium commonly exists at 10,500 ppm, followed by sulfate (approximately 2,700 ppm), magnesium (roughly 1300 ppm), calcium (about 420 ppm) and potassium (approximately 400 ppm).

Changes in concentrations of ions outside of sodium and chloride generally do not affect the salinity as these two elements make up such a large portion of saltwater. Seawater tends to have a natural salinity of 35ppt (parts per thousand), meaning that every kilogram of water has 35 grams of dissolved salts. This corresponds to a specific gravity of 1.0264 and a conductivity of 53 mS/cm. Although ranges can fluctuate over coral reefs for reasons such as evaporation or freshwater runoff. Freshwater contains very little salt ions and generally has a salinity of 0.5ppt. Water in-between seawater and freshwater is usually defined as brackish and has a salinity of roughly 0.5ppt to 30ppt.

Salinity is extremely important in saltwater aquariums as a salinity measurement is often the first parameter measured in making seawater.  Commercial salt mixes, designed for aquariums, are added to a freshwater source, most commonly tap water or reverse osmosis deionized water.  An aquarist must measure the salinity level of the water while adding salt to get within the ideal range. This is done anytime saltwater is made, either when first setting up an aquarium or when performing water changes periodically.  Monitoring the salinity of artificial seawater is crucial so as not to create saltwater with an improper salinity level, as it could stress marine life.

In addition, as water evaporates in the aquarium, your salinity level will rise because the salt ions remain in the water.  To compensate for evaporation in saltwater aquariums, the user must top off with freshwater frequently. Maintaining a salinity and not fluctuating significantly throughout the day is crucial as saltwater aquariums, particularly reef tanks, do not benefit from extreme water chemistry deviations. Salinity is often tested daily, particularly anytime saltwater is being made, an aquarium is being topped off with freshwater when performing water changes.

As a general guideline, it is best to maintain a salinity of 1.026 (or 35ppt or 53 mS/cm conductivity) and know where your aquarium fish come from to distinguish what their natural salinity level is. It is common for aquarists to keep fish-only saltwater tanks at slightly lower salinity levels due to the belief that marine organisms are less stressed at lower salinity levels, this may or may not be true. Certain species of fish and invertebrates might actually die of kidney failure if the salinity is kept too low for prolonged periods of time.  Some organisms may be from geographic origins, such as the Red Sea, which have higher salinity levels, or brackish estuaries, which have lower salinity levels. When deciding your salt level, it is best to know where your aquarium species naturally come from and create an environment closest to its original habitat. 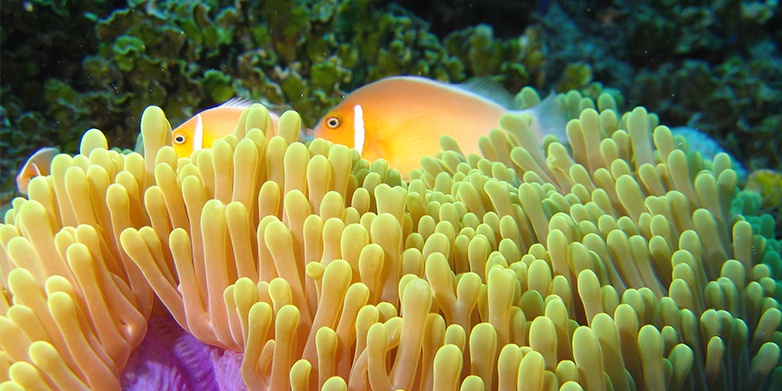 How do you measure salinity in aquariums?

There are a number of ways to perform salinity measurements in your aquarium.  The most well-known methods by marine aquarists include using hydrometers, refractometers and conductivity meters. The most widely used method for aquariums are hydrometers, particularly swing-arm models. These can be problematic as they do not compensate for sample temperature, need to be hydrated with sample prior to use and can be prone to inaccuracies.  Optical refractometers designed for seawater also have downsides. Even though calibration solution exists, determining salinity can be difficult and not always easy to read. Optical refractometers are often calibrated to a specific temperature range and if your sample temperature does not fit in that range, your results can be skewed.

Conductivity is a measurement of the dissolved ionic solids present in the water. Additionally conductivity may also be used as a means to measure salinity, as the salts become ions when dissolved in water that can conduct an electrical current sensed by the meter and measured in mS. Temperature is important when reading salinity as the mobility of ions increases when the water becomes warmer or slower when cooler.

Digital refractometers, or digital salinity meters, provide an easy to use, quick and accurate way to determine salinity in a saltwater aquarium.  Hanna Instruments offers our Digital Refractometer for Seawater Analysis (HI96822) which is perfect for saltwater aquariums as it can measure in Practical Salinity Units, parts-per-thousand (ppt) or specific gravity. It has built in automatic temperature compensation and produces results in seconds. 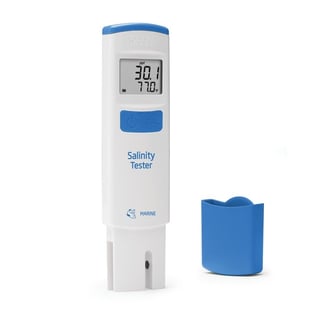 In addition to  salinity digital refractometers, there are salinity testers. Testers provide a simple and fast way to test natural or artificial seawater. Hanna's Marine Salinity Tester (HI98319) offers a pocket-sized temperature compensated testing solution, with a multilevel LCD screen that displays your salinity and temperature settings. The waterproof tester ensures that you are protected from your day to day testing, and unlike with refractometers, you get no light interference. This tester can display your readings as parts per thousand (ppt), practical salinity units (PSU), or specific gravity (S.G.).

We also make top of the line EC meters, which can support a high level of conductivity for accurate salinity analysis. Our edge (HI2003) is a conductivity/digital salinity meter with a four ring conductivity probe technology that allows the user to measure the samples from very low conductivity to very high conductivity, such as seawater.

What is Better for Salinity Measurements...Conductivity or Refractometry?

When comparing conductivity to refractometery to measure salinity, the consensus among the scientific community favors conductivity. This is because there is non-conductive material in your sample which can impact the refractive index of seawater but not the actual salt concentration. For example, if we add sugar to artificial seawater, we will see that our salinity value will increase but we have not changed the concentration of salt in the water. If we measured the salinity of that sample with our HI98319 conductivity meter you’ll notice the value is largely unchanged. It is common to have inflated values with a refractometer due to the large number of materials which will affect the density of that water outside of the dissolved salt values. For example, anti-caking agent in salt mixes, organic waste, sugars, potential non-ionic contaminants or uneaten fish food can increase the values produced on a refractometer but this would be less likely to occur on a conductivity meter like the HI98319. Added bonuses of using conductivity to measure salinity are that you no longer have a light interference, and the temperature compensation is of your direct sample and not as influenced by ambient atmosphere near the surface of a prism.

Written by Kevin Costa
Kevin used to operate an aquarium maintenance company and worked at local fish stores before working at Hanna. He is a passionate aquarium hobbyist who enjoys reef keeping and planted aquariums. He graduated New York University and received a graduate certificate in aquaculture from the University of Florida specializing in fish health. Kevin may be reached at kcosta@hannainst.com or 401-450-6051.