Infrared energy (IR) refers to the invisible thermal radiation that is emitted naturally from all objects. IR comprises the part of the electromagnetic spectrum that falls between radio waves and visible light.

Sir Frederick William Herschel was the German-born British astronomer who first discovered IR in 1800. The discovery was made as he passed sunlight through a prism and held a thermometer just beyond the red end of the visible spectrum. Initially intended to measure the ambient temperature of the room, Herschel found that the temperature reading was higher than that of the visible spectrum, and thus an invisible form of light must exist.

As IR is just outside the visible spectrum, it can more readily be felt as heat. The heat energy naturally given off by objects is what can be detected and measured. IR can be measured through the use of non-contact, or IR thermometers. By simply pointing an IR thermometer at an object, the emitted heat energy is picked up by the sensor and converted to an electrical signal; this signal is then displayed as a temperature reading.

Almost all objects give off not only emitted heat energy, which is what is used to determine IR measurements, but reflected and transmitted energy as well. The one exception to this is a black body surface that emits 100% heat energy without reflecting or transmitting any energy. The reflected and transmitted energy of most objects being measured must be accounted for in order to achieve accurate IR measurements. 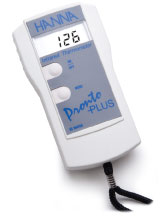 A catering company contacted Hanna Instruments requesting a quick solution to measure their prepared dishes. Due to their requirements of a fast, accurate, non-invasive temperature reading, Hanna suggested the Infrared and Contact Thermometer for the Food Industry - HI99556.

With a response time of approximately one second, a measurement range from -10 to 300°C, and a fixed emissivity compensation of 0.95, the catering company was pleased they could swiftly monitor the temperature of a wide range of their dishes. Occasionally, the catering company wished to take internal measurements in addition to surface IR measurements. The HI99556-00 is supplied with the detachable HI756PW thermistor probe for penetration into semisolids and has an accuracy of ±0.5°C. When choosing an IR thermometer the company also considered the distance-to-object ratio for the thermometer.

The HI99556-00 has a distance-to-spot ratio of 3:1, meaning that the diameter of the measured area is one-third of the distance between the thermometer and the object. They usually held the thermometer around 12 inches away from the food, and thus had a measuring area of approximately 4 inches. The catering company felt assured and appreciative that their IR readings were accurate and unobtrusive to their prepared foods.