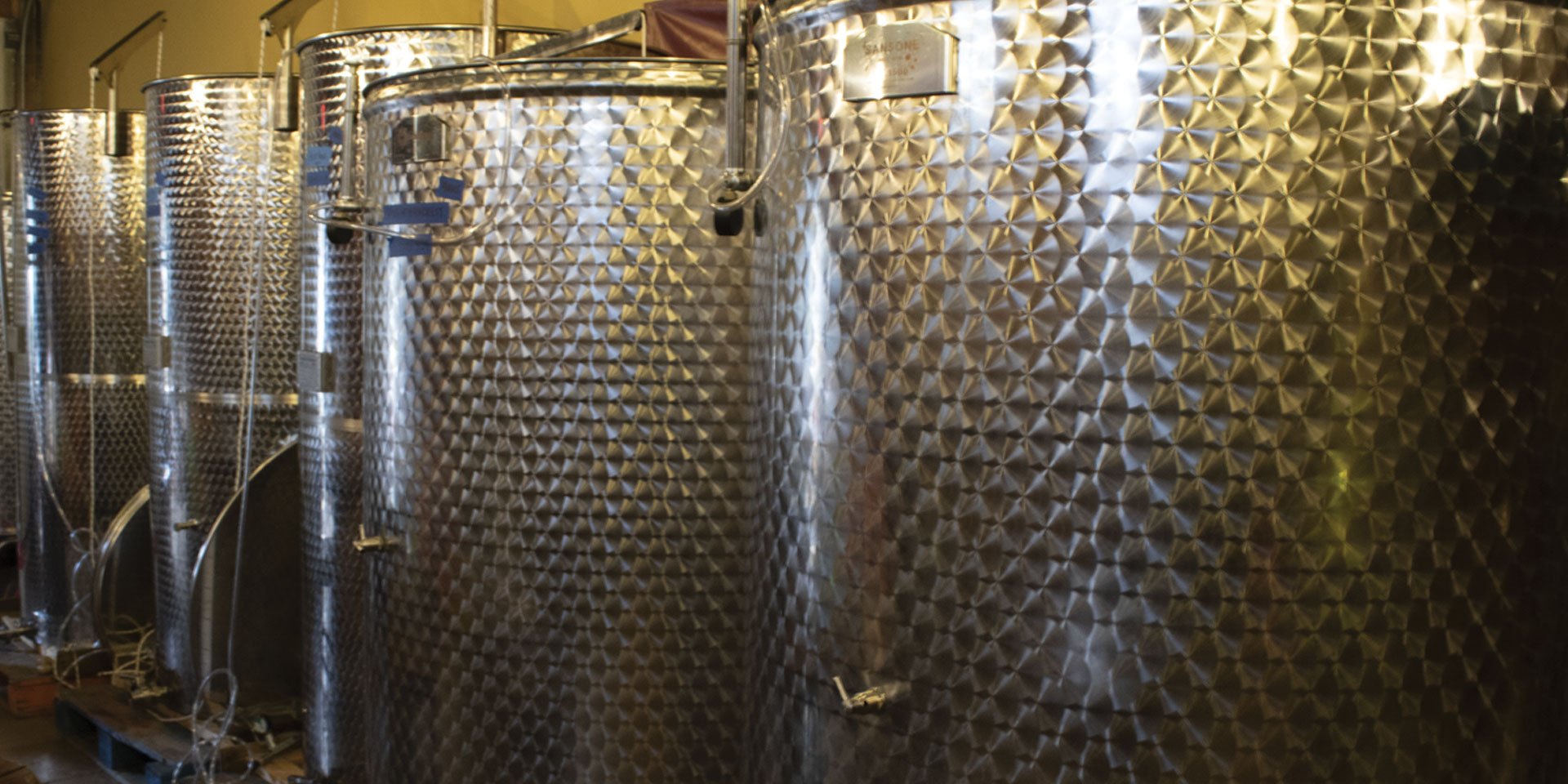 The process of fermentation was a mystery for the bulk of recorded human history. Microscopy and modern-day research have given us a solid understanding of the microbial processes that occur during winemaking, but even with those understandings and advances, the fermentation process can be a bit challenging for some to grasp. This is especially true when it comes to that other fermentation – the malolactic conversion.

Whereas the primary alcoholic fermentation is clear with its rigorous bubbling of CO2 and obvious sensory changes of diminishing sugar sweetness and increasing post-fermentation bouquet, the malolactic fermentation is very subtle. At most you may hear the slight crackle of gas bubbles evolving from solution, or note mild decreases in acidity with rounder, richer mouthfeel from the wines. Unlike the alcoholic fermentation though, there are really no clear signals as to when the fermentation commences and when it finishes beyond perhaps a few bungs popping out of barrels.

A basic understanding of the malolactic fermentation and how to manage wines with malic acid present is key for winemakers though, as improper handling in the cellar and at bottling can lead to spoilage or an ML fermentation occurring in bottle, ruining an entire product run.

The Need for Malolactic Management in Winemaking

The presence of appreciable amounts of malic acid essentially renders a wine microbially unstable. There are a number of common microbes involved in the winemaking process capable of utilizing malic acid as an energy source, and they will actively ferment the malic acid to a series of different end products, some of which are desirable, but many of which can be unpleasant from a sensory standpoint.

The largest issue by far in management of the ML process is that some microbes will convert malic acid to acetic acid in the fermentative process, often producing acetic acid concentrations that exceed threshold, and at times legal limit levels in wine. This is a clear spoilage and requires specialized filtration processes to remove the acetic acid, or the product is simply unsellable as a finished wine. Even the desired ML fermentation from oenococcus bacteria will produce moderate increases in acetic acid concentrations, so careful tracking of a healthy ML becomes critical in preventing vinegar spoilage in winemaking.

Beyond acetic acid spoilage, wines with malic acid present become opportunistic media for other spoilage issues. Any wine microbe with metabolic pathways for converting malic acid are capable of utilizing it as an energy substrate for growth. Some of the more exotic spoilages, such as ropiness from lactic acid bacteria, can often be the result of poor malic acid management practices in the cellar allowing microbial blooms to occur.

As with the alcoholic fermentation, inoculation with desired microbes and the tracking of the fermentation process to completion are recommended, followed by a continued protocol of SO2 management once the ML fermentation is complete; or a well-managed SO2 and isolation protocol for wines where no ML fermentation is desired, such as a crisp Sauvignon Blanc. Any wine with what is considered an incomplete ML fermentation (anything above 50 mg/L) should also receive sterile filtration protocols at bottling to avoid any malolactic activity occurring after final packaging.

The easiest way to monitor your ML fermentation is to send wine samples to an outside third-party lab service who can run the testing for you. At some point though, this becomes cost prohibitive for many wineries and they seek to move ML monitoring in-house.

The poor man’s ML test is to use paper chromatography. Chromatography paper is marked along the bottom with small samples of wine, as well as standards for malic acid and lactic acid. The paper is then placed into a jar with a small amount of an organic solvent usually made up of formic acid, butanol, water, and a bromocresol green indicator dye. The solvent will travel up the paper by capillary action over a period of several hours and the main acids of tartaric, malic, and lactic will separate by mass, reaching different points on the paper. Once finished the paper is removed and allowed to dry. The dye indicator will turn the paper greenish in color, however the points of acid will turn yellow. As the malic acid is converted to lactic acid, the points for malic acid will slowly fade away and disappear altogether over subsequent tests.

The main benefit of paper chromatography is that tests are fairly easy to run and generally inexpensive. It’s drawbacks though are in handling the organic solvent chemicals, and the fact that the test is largely qualitative in nature. It’s not able to tell you the concentration of malic acid in your wine, just whether any shows by chromatography separation. The limits of paper testing generally tend to be on the high range of what are considered complete ML fermentations, so some winemakers may call an ML complete by paper test when in fact the process is still ongoing.

As advancing needs for quality control, sample throughput, and accuracy become key for winemakers, most wineries will eventually jump to the quantitative means of measuring malic acid in wine – enzymatic testing by spectrophotometer.

Enzyme kits in wine analysis commonly run at 340 nm in wavelength with 10 mm square cuvettes. In the case of malic acid analysis, the underlying reaction is a conversion of L-malic acid to oxaloacetate by the L-malate dehydrogenase enzyme. During the reaction, NAD+ is converted to NADH in a 1-to-1 direct stoichiometric ratio to lactic acid, and it’s actually the NAD+/NADH conversion detected by the spec in measurement.

A second reaction also occurs taking the oxaloacetate and L-glutamate to L-aspartate and alpha ketoglutarate. The purpose of the second reaction is to drive the equilibrium of the malic acid conversion from the first reaction to completion.

The drawbacks to enzymatic testing are the initial up-front costs associated with purchasing a spectrophotometer, as well as the auxiliary equipment such as micropipettes, tips, and cuvettes involved in sample preparation. The testing methods also require some lab training and experience in proper sample preparation as incorrect techniques can have a large impact on test results given the very small sample volumes used in testing.

The advantages of spectrophotometric testing though are that the testing times are much quicker than paper chromatography, there is no harsh chemical solvent to handle or dispose of, and the results give a true quantitative concentration of malic acid in the wine. The per-sample cost of running a spectrophotometer, especially over a long period when compared to the time for paper chromatography analysis and the costs of outside lab testing, eventually makes a spectrophotometer one of the first major investments for many winery labs. Specs also offer functionality to expand into other parameters of wine testing such as YAN and residual sugar analysis.

Solutions for Malic Acid Testing in Wine from Hanna Instruments 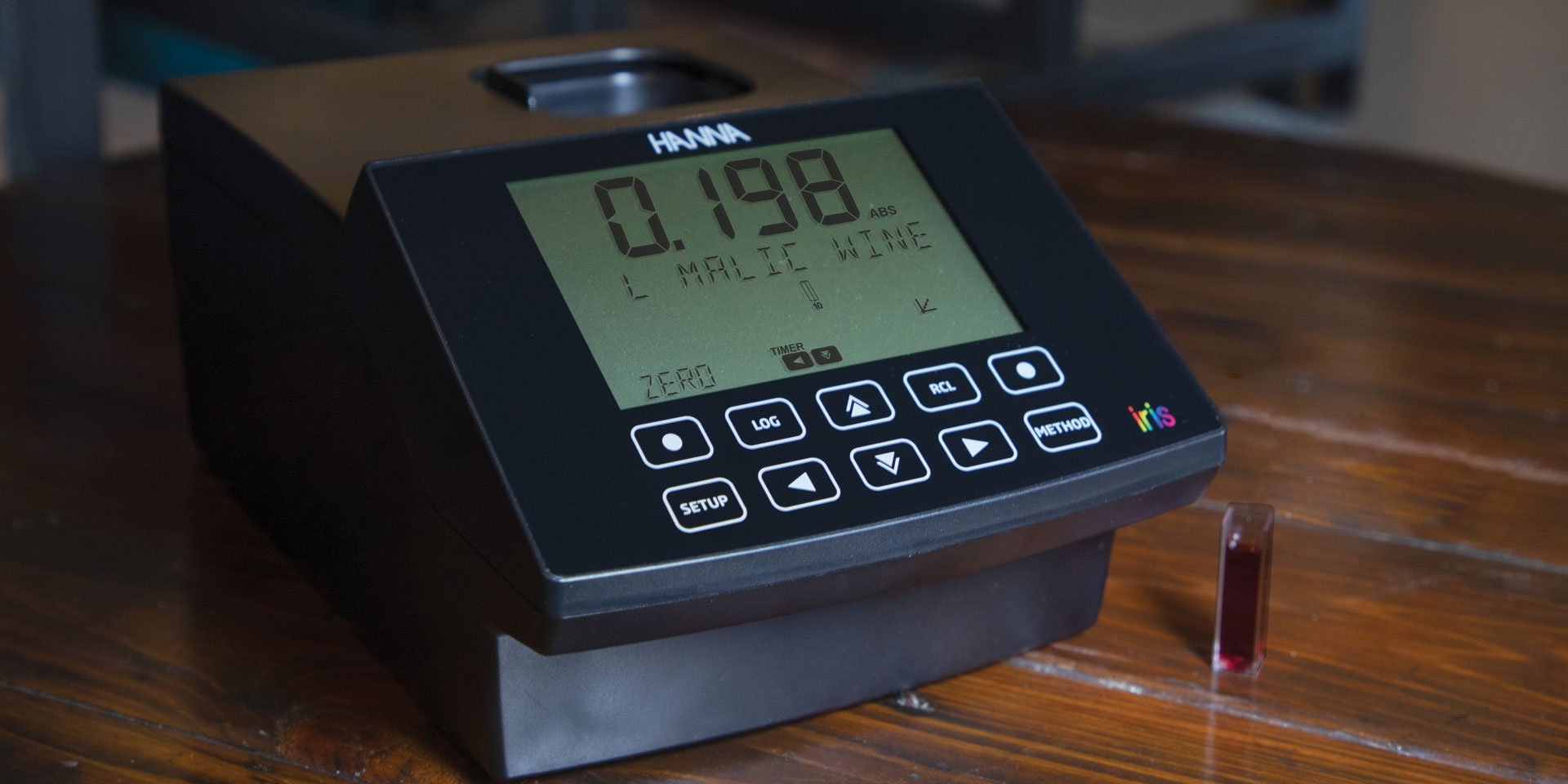 The unit easily handles the leading commercial enzyme kits for common wine analyses run by spectrophotometer, and would greatly expand the testing options for any wine lab ready to step up to quantitative measurement in-house of malic acid and many other enzyme-based wine analyses.

Fermentation may be a long process...